There must have been something in the water in Coconino County in 1926. Earlier this week when I was researching the Harry Miller case (see previous post), I discovered that the Miller trial happened just four cases ahead of another case we know well around here – the Granville Johnson case. We normally don’t accept three-dimensional artifacts around here, but the Johnson came in as such a fascinating collection of material that we couldn’t possibly get rid of it. In addition to the textual court records we have in our Coconino County Superior Court criminal case holdings, we also have the murder weapon (a hatchet), photographs of the victim, and images of a very fascinating bit of 1920s car culture – something called a “garage cabin.”

As the story goes, Mr. Granville Johnson married a wealthy widow from California, and decided to take her on a trip to visit his family in the Midwest. The couple stopped on May 2, 1925 to stay in the garage cabin at the Mountain Spring Ranch…you can see from the images below that the guests would literally drive their car into the building, and sleep in a bed on an elevated platform. THIS SITE describes the establishment as being along an early alignment of Route 66. (Route 66ers, any ideas?) 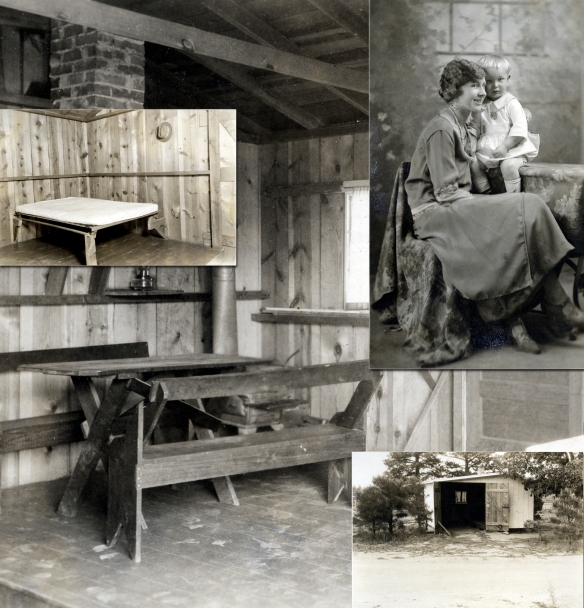 A page from the Mountain Spring Ranch Register, entered as evidence in the case against Granville Johnson.

That evening, Mr. Johnson reported that his wife had been murdered. The Williams police arrived, and a “search was made for the instrument which caused the wounds, and a blood-stained hatchet was discovered sticking in the ground about one hundred feet from the door of the cabin.” Mr. Johnson apparently forgot that the murder weapon has his name etched in the handle! See photos above. The other aspect of the story that emerged is that Mr. Johnson had taken out multiple life insurance policies on his wife. See records from the case below for more details. 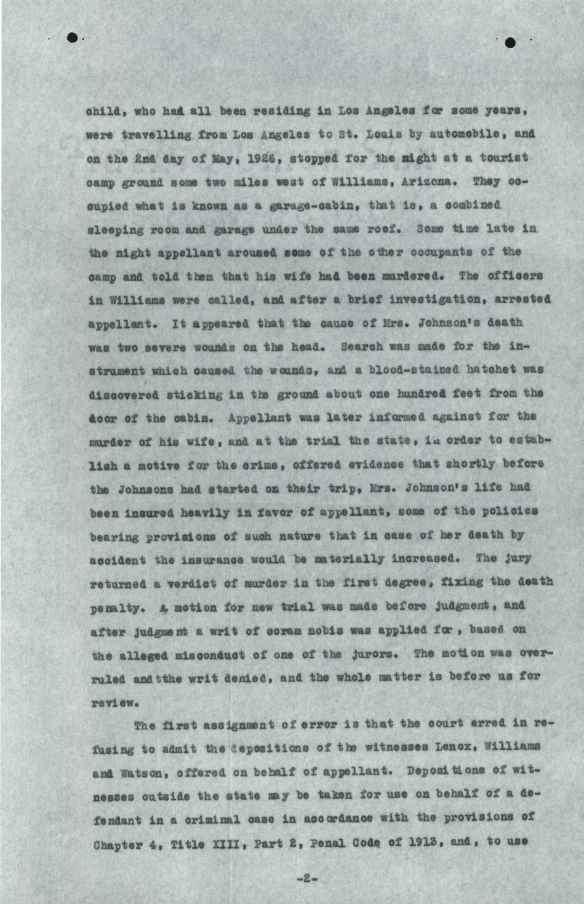 We are happy to report that Granville Johnson lived out the remainder of his days at the State Prison in Florence, Arizona, until he passed away in 1950. But the story doesn’t end there! Our Photographs Archivist, Wendi Goen, shares the following:

“About five years ago, just before the Archives moved to the Rosenbaum Building, I received a reference call.  The woman on the other end of the phone told me that she was looking for information on a criminal case.  I asked her if she could give me more information.  She said ‘Well, my great-grandmother was killed by her second husband while they were traveling through Arizona.’    She and her family had no information beyond that regarding the murder. I asked a few more questions before I realized that I knew the case well.    It was a 1925  case and the perpetrator’s name was Granville W. Johnson.  He was a conman and saw a widow with a small son as an easy target.  The caller’s grandmother was a widow and owned land in Los Angeles.  Johnson saw the opportunity to pull off another con.  He wooed and courted the widow and eventually married her.  Unbeknownst to his blushing bride,  Johnson had taken out several life insurance policies on her and named himself as the beneficiary on all of them.  Shortly after their wedding, he said that he wanted to introduce his new wife and step-son to meet his family in Missouri.  They packed up the car, took money out of the bank to finance the trip and headed out for Missouri.

They reached Williams. Arizona and checked into a ‘garage motel.’  Each guest had their own ‘cabin’ in this type of motel.    Soon after they checked into the motel, other guests noticed Johnson driving back and forth in front of the motel.  Several hours later, Johnson showed up at one of the other cabins, holding his stepson and banging on the door.  When the guest staying at the cabin opened the door they discovered Johnson covered in blood claiming that robbers killed his wife and took her money.  In reality, there were no robbers.   Johnson claimed he had been in Flagstaff when his wife was murdered and offered his odometer reading as ‘proof.’   Other guests informed authorities that they had seen Johnson driving back and forth in front of the motel earlier in the day.   Johnson had killed his wife with a hatchet (that had his name on the handle) and threw it into the surrounding woods where authorities quickly discovered it.  Johnson was convicted and sent to prison.

The woman on the phone was grateful to finally hear the details of how her great-grandmother had died.  I told her that we had the case file here and that we had some evidence.  Included in the evidence was a photograph of the caller’s great-grandmother and the caller’s grandfather as a small boy.   She was silent for a few seconds and I asked her if she was okay.  I thought that perhaps I had revealed a bit too much.  She cleared her voice and said, ‘My grandfather died before I was born, I have never seen a picture of him or my great-grandmother.’  I was able to send her a copy of the photograph.”